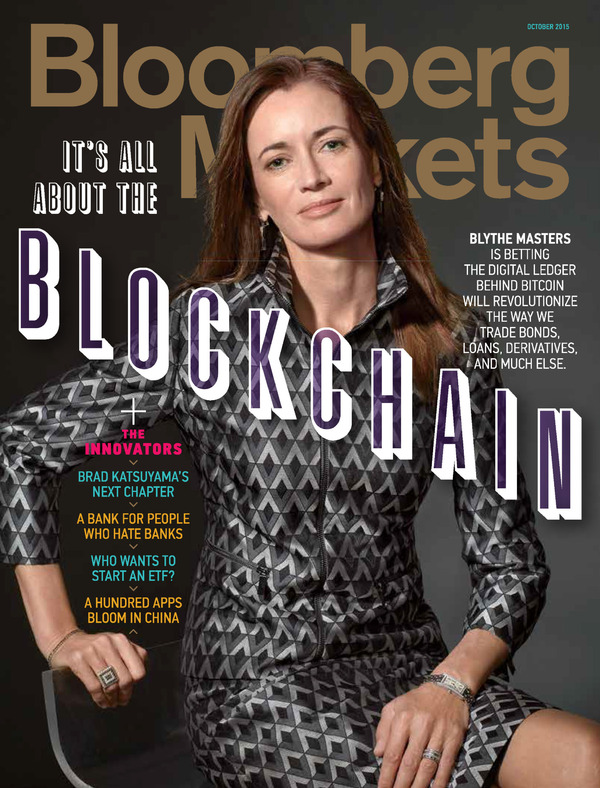 Facebook
Twitter
Google+
Pinterest
WhatsApp
The banker who helped give the world credit-default swaps wants to upend finance again—this time with the code that powers bitcoin.
by
Edward Robinson

The penthouse meeting room in Le Parker Meridien hotel in midtown Manhattan is humming with chatter on this June afternoon. About a hundred money managers are networking at the end of the day at a Sandler O’Neill & Partners investor conference as the green rectangle of Central Park stretches into the distance 42 floors below. With neckties loosened and icy drinks in hand, the attendees largely ignore the founder of a fintech startup who’s presenting a PowerPoint about his investing smartphone app. But when the next guest takes the floor, the room falls silent.

These Wall Street veterans all know who Blythe Masters is. She’s the wunderkind who made managing director at JPMorgan Chase at age 28, the financial engineer who helped develop the credit-default swap and bring to life a market that peaked at $58 trillion, in notional terms, in 2007. She’s the banker later vilified by pundits, unfairly some say, after those instruments compounded the damage wrought by the subprime mortgage crash in 2008. Now, one year after quitting JPMorgan amid another controversy, Blythe Masters is back. She isn’t pitching a newly minted derivative or trading stratagem to this room. She’s promoting something wilder: It’s called the blockchain, and it’s the digital ledger software code that powers bitcoin.

Masters is the CEO of Digital Asset Holdings, a New York tech startup. She says her firm is designing software that will enable banks, investors, and other market players to use blockchain technology to change the way they trade loans, bonds, and other assets. If she’s right, she’ll be at the center of yet another whirlwind that will change the markets.

“You should be taking this technology as seriously as you should have been taking the development of the Internet in the early 1990s,” Masters, a lithe 46-year-old Englishwoman with auburn hair and the proper diction of the Home Counties, explains to the rapt audience. “It’s analogous to e-mail for money.”

That’s a bold statement, but Masters isn’t the only voice heralding the coming of the blockchain. The Bank of England, in a report earlier this year, calls it the “first attempt at an Internet of finance,” while the Federal Reserve Bank of St. Louis hails it as a “stroke of genius.” In a June white paper, the World Economic Forum says, “The blockchain protocol threatens to disintermediate almost every process in financial services.”

In a matter of months, this word, blockchain, has gone viral on trading floors and in the executive suites of banks and brokerages on both sides of the Atlantic. You can’t attend a finance conference these days without hearing it mentioned on a panel or at a reception or even in the loo. At a recent blockchain confab in London’s hip East End, the host asked if there were any bankers in the room. More than half the audience members, all dressed in suits, raised their hands.

Now, everyone’s trying to figure out whether the blockchain is just so much hype or if Masters’s firm and other startups are really going to change the systems that process trillions of dollars in securities trades. When investors buy and sell syndicated loans or derivatives or move money around the world, they must cope with opaque and clunky back-office processes that rely on negotiated contracts between buyers and sellers, lots of phone calls, lots of lawyers, and even the occasional fax. It still takes almost 20 days, on average, to settle syndicated loan trades.

Masters is betting that the blockchain, the breakthrough that permits people to buy and sell bitcoins without the need for an intermediary, can be used to streamline all manner of financial transactions. A June report backed by Santander InnoVentures, the Spanish bank’s fintech investment fund, estimated the blockchain could save lenders up to $20 billion annually in settlement, regulatory, and cross-border payment costs.

“You have front-end systems trading at warp speed, and nanoseconds of competitive advantage are being extracted, and yet the back end of Wall Street hasn’t been fundamentally overhauled in decades,” Masters says in an interview at her offices in Manhattan’s Flatiron District. “Firms are dealing with greater requirements for reporting, transparency, and dissemination of data. Costs have gone up and revenues have gone down. This technology really gets to the core of all those issues.”

That’s why there’s been a Cambrian explosion of blockchain startups, accelerators, and skunkworks in London, New York, and Silicon Valley. In April, UBS installed a half dozen developers in London’s Level39 accelerator to download blockchain source code from the Internet and delve into how it might revolutionize payments, cybersecurity, and other banking needs. Barclays, Goldman Sachs, the New York Stock Exchange, and Santander are backing cryptocurrency ventures. And no surprise, Marc Andreessen, Jim Breyer, Reid Hoffman, and other denizens of Sand Hill Road are all over this space. Venture capitalists plowed $400 million into dozens of digital currency startups in the first six months of this year, a fourfold jump from all of 2013, according to industry news site CoinDesk.

Some of these ventures are building on the actual bitcoin blockchain. In June, Nasdaq teamed up with Chain, a San Francisco firm, and launched a project to use the blockchain to issue and transfer the equity shares of closely held companies on the exchange’s private marketplace. “The blockchain is going to bring levels of efficiency to the financial markets that we’ve never seen before,” says Nasdaq CEO Bob Greifeld. “In time, it could be as impactful on the back office as electronic trading was on open outcry.”

By contrast, Ripple Labs, another San Francisco company, runs a self-contained network for financial institutions that doesn’t rely on bitcoin at all. Masters plans to offer banks and other financial players both options: Digital Asset is creating an off-the-shelf private blockchain product and developing ways to connect its customers to the existing bitcoin system.

Whatever form it takes, the blockchain has the potential to change the very structure of the financial services industry, says Oliver Bussmann, the chief information officer at UBS. “If you brought up bitcoin with bankers 12 months ago, you’d lose their attention immediately,” Bussmann says. “Now, everyone sees this as a critical topic. I know of more than 100 firms that are trying to make the blockchain more scalable, more secure, to make the one that everybody will use. There’s a race on out there.”

Maybe so, but rewiring the market’s infrastructure is an awfully big task. So is persuading financial players to place their trust in a system embraced by cryptocurrency anarchists and other fringy characters. Even if market pros do grasp the blockchain’s potential, will they buy in?

“Look, the technology is potentially great, but you’re going to have to bring along all the regulators and the banks to change the ecosystem,” says Hank Uberoi, the former co-head of Goldman Sachs’s global technology operations and now the CEO of Earthport, a London-based payments venture. “Change comes very slowly in that world. That’s going to be the hardest part.”

When it comes to adopting innovation, the financial services industry doesn’t exactly have a stellar record. For example, the global interbank payments system, which Uberoi’s Earthport is trying to shake up, is managed by a consortium of more than 10,000 institutions. It’s so antiquated that it still takes days to send transactions from one part of the world to another. Jon Matonis, a founding director of the Bitcoin Foundation, a Washington group that promotes the cryptocurrency, says a private blockchain run by banks could end up as just “another cartel” and function as poorly as the payments consortium.