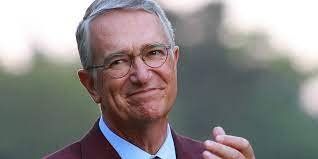 The arrival of the death cross does not seem to scare Michael Saylor, who bought $500 million just when this terrifying pattern was forming. But he is not the only one who thinks so. Ricardo Salinas Pliego, the third richest man in Mexico, also believes that Bitcoin is an excellent investment.

During an interview with the director of Blockchain Land, José Rodríguez, Ricardo Salinas Pliego assured that Bitcoin is as solid an investment as gold. He explained that the debate about its nature is not so crucial for those who know its properties.

Ricardo Salinas argues that the fact that Bitcoin is finite, easy to transport, and enjoys extreme liquidity internationally are compelling reasons to consider it an asset worth taking into account when building an investment portfolio.

He was one of the first prominent Latin American businessmen to talk about the cryptocurrency and support it on social networks. He also revealed that 10% of his liquid investment portfolio was held in BTC, which is obviously no small thing considering his fortune.