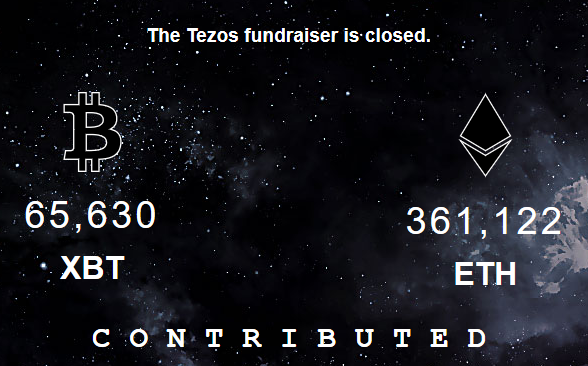 Blockchain project Tezos has completed its crowdsale ICO, raising approximately $232 million in bitcoin and ether to shatter the previous record held by EOS. The ICO, which began on July 1 and lasted until the bitcoin network had processed 2,000 transaction blocks, collected a total of 65,630 BTC and 361,122 ETH.

Tezos is one of a number of projects designed to improve the blockchain model to better facilitate smart contracts. Specifically, it is designed as a “self-amending crypto-ledger,” meaning that stakeholders have the final say in what protocol upgrades are deployed to the network. In theory, this will create an ecosystem in which development is more decentralized than in first-generation blockchain projects, where a great deal of power is centralized in the hands of core developers and miners.

When a developer proposes a protocol upgrade, they can attach an invoice to be paid out to their address upon approval and inclusion of their upgrade. This approach provides a strong incentive for participation in the Tezos core development and further decentralizes the maintenance of the network.

One goal of the Tezos system is to prevent blockchain splits like the one that occurred between Ethereum and Ethereum Classic following The DAO fiasco. But not everyone believes this is the best approach. On July 10, Ethereum co-founder Vitalik Buterin expressed his disagreement with the Tezos governance model.

Indeed. Tezos has an official goal of eliminating the need for extra-protocol governance; I personally disagree with this direction.

Tezos responded to clarify that while it hopes to eliminate the need for hard forks, it does not get rid of the possibility of this important fail-safe mechanism.

ICOs are becoming increasingly popular, having now raised more than $1 billion in funding. As ICO investments ramp up, they are likely to attract increased attention from federal regulators. Some crowdsales have attempted to avoid running afoul of the murky regulatory environment by purportedly refusing to sell to investors in certain locations, including the United States. The EOS purchase agreement, for instance, stated that U.S. residents could not contribute to the crowdsale, even though EOS primarily advertised in Times Square in New York City.

Proponents of regulation–such as one prominent People’s Bank of China (PBoC) advisor–believe regulation is necessary to prevent scammers from using the ICO model as a way to swindle uninformed investors. Opponents, however, worry that regulators will go overboard and stifle innovation with heavy-handed legal requirements. In any case, the success of the Tezos, EOS, and Bancor ICOs likely makes it inevitable that regulation is coming soon–for better or worse.